My Piglet and Pooh...

It's happened.  Three and a half years in and the 'twin thing' seems to have taken a hold between my very own Thing One and Thing Two, Louis and Theo.  Having spent the last couple of years largely ignoring each other it seems that they have fallen in love for the very first time and it's a beautiful sight. Cuddles, kisses, feotal like spooning and heart melting moments where noses rub, eyelashes flutter and fingers entwine.  Theo wiped away Louis's dribble this afternoon.  Dummy addicts both of them, splutter, saliva and all round sogginess is standard.  Curled up on the sofa, grubby knees knocking and smelly feet touching, Theo glanced over at his twin and leaning over,caught the offending droplet just before it fell from his chin and onto his sodden dinosaur t- shirt.
No one else would have noticed. It was hardly a picture book moment just a sweet, tender little exchange which had my insides melting like warm chocolate fondant. My miracle, never would have imagined I could be this lucky, boys...

“Piglet sidled up to Pooh from behind. "Pooh?" he whispered.
"Yes, Piglet?"
"Nothing," said Piglet, taking Pooh's hand. "I just wanted to be sure of you.”

Of course they'll be knocking seven bells out of each other by morning. I wonder if  Ronnie used to wipe the dribble from Reggie's chin? 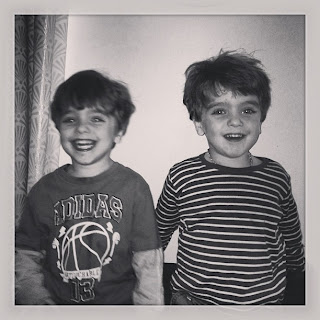 Email ThisBlogThis!Share to TwitterShare to FacebookShare to Pinterest
Labels: Life with multiples