It's a complicated life...

I'm curious as to how other separated couples manage Christmas.  If neither of them have 'moved on' that is. Like us.  I'm bracing myself for a few days of old time togetherness (yep,for the sake of the children) and wondering what uncomfortable, buried feelings will be pushed to the surface and what barely covered wounds might be ripped open once again. It's been a long time now. You'd think it would be getting easier. It isn't.
This will be the third Christmas spent with us not being a couple and yet our situation feels as mixed up and messy as ever.  The tree is twinkling in the corner, the candles are hiding all the stains on the carpet and making the house look vaugely presentable and if you were observing us over the turkey and stuffing I can predict that you would be forgiven for thinking we were a happy, united family.  We'll probably do a fairly impressive job of pretending to be one for most of the Christmas period and a pleasant time will hopefully be had by all but then what?
Well, in four or five days time we'll retreat back to our own separate but connected worlds, both wanting different things for the year ahead and both praying that the other will have some kind of seismic shift and finally see sense.
We used to have great Christmasses.  Cosy, family time is what I love more than anything.  Loved.  Now, it's different.   The bubbles and Bailey's might flow on the twenty fifth just like it always did but it won't lead to cuddles and kisses like before. In our old life. It won't because it mustn't.
Damn you, holiday season, for making me wish that life was a little bit more like a Richard Curtis movie and a little bit less like the 1996 Brookside Christmas special.
Posted by emplus4 at 20:40 No comments:

Email ThisBlogThis!Share to TwitterShare to FacebookShare to Pinterest
Labels: relationships

When we were good...

The long oak coffee table that was the living room centre peice in my 'old' life is now back with me where it belongs.  The cluttered, colourful flat we lived in as a family of three, before the triplets, before the breakup and before that little blip called cancer is being sold and well, it really does feel like the end of a pretty monumental era.  Living in a rented house for the last two years means I haven't really made my mark on the place I now call home.  Moving in with the babies, Jake and experiencing the start of what is affectionately known as 'chemo brain' - the last thing on my mind was interiors and decor. A few snazzy cushions and some twinkly lights is about as far as I've gone in the style stakes and it shows...
So tonight my beloved table was brought to the house and positioned perfectly by the sofa and TV. I dimmed the lights, placed a fat candle in the middle of it and sat down. An unexpected tidal wave of nostalgia, sentiment and sadness washed over me and it was a little overwhelming.  Memories poured in thick and fast and what took me by surprise was that the majority of them were happy ones.  It's so much easier just to think of how bad things got.  A lot less painful to only remember the terrible times. But there were good times too. Lots of them.
When I was Ella's age my mum used to read nursery rhymes aloud to me and the one I never tired of hearing was about the little girl with the curl -

There was a little girl,
Who had a little curl,
Right in the middle of her forehead.
When she was good,
She was very good indeed,
But when she was bad she was horrid.

When we were good we were very good indeed, but when we were bad it was horrid.
I'm pleased to have my wooden table back. Now I just need to find a wooden box to put these mixed up thoughts in... 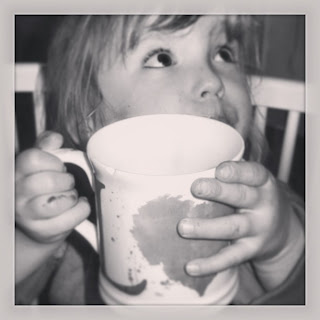